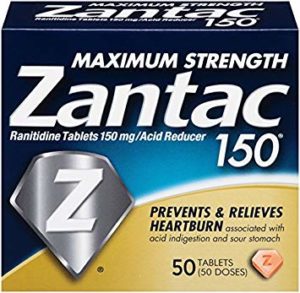 More than a year after a diligent pharmacy (Valisure) warned the world about a cancer risk linked to Zantac (ranitidine), former users of the drug continue to be diagnosed with cancer long after they last took it. The warning led to recalls for all versions of the popular heartburn drug, but that hasn’t stopped the cancer fallout.

Zantac and generic ranitidine — in both prescription and over-the-counter forms — have been used by millions of Americans since the drug was first approved in 1983.

In 1988, Zantac — made by GlaxoSmithKline — became the world’s best-selling drug, and one of the first legal drugs to top $1 billion in yearly sales.

Pfizer received FDA approval for an over-the-counter version of Zantac in the U.S. The brand later moved to Johnson & Johnson, Boehringer Ingelheim Pharmaceuticals, and Sanofi SA, which currently sells Zantac in the U.S. Other companies also launched generic OTC versions.

European and American regulators recalled the blood pressure drug valsartan made by China’s Zhejiang Huahai Pharmaceuticals. Regulators had found the cancer-causing impurity N-nitrosodimethylamine (NDMA) in samples of drugs containing ranitidine. Regulators have since found the impurities in several drugs in the same class of angiotensin II receptor blockers.

U.S. and European regulators said they were reviewing the safety of ranitidine.

Novartis AG’s Sandoz Unit, which makes generic drugs, announced it was halting distribution of its Zantac versions in all markets. Canada requested that drug makers selling ranitidine halt its distribution.

FDA said it had tested and found “unacceptable levels” of N-nitrosodimethylamine (NDMA) in samples of drugs containing ranitidine.

GlaxoSmithKline recalled prescription-only Zantac medicines in all its markets.

Sanofi recalled OTC Zantac in the United States and Canada. A day earlier, the UK unit of Teva Pharmaceutical, the world’s largest generic drug maker, had recalled some batches of ranitidine.

In late 2019, manufacturers began issuing Zantac recalls after confirming they had found high levels of the cancer-causing chemical Nitrosodimethylamine (NDMA) in the pills.

The problems are not linked to a manufacturing problem where the chemical contaminated the pills. The NDMA found in testing is believed to be a byproduct of ranitidine contained in Zantac pills. The problem occurs in a conversion process when the cancer-causing chemicals are stored at high temperatures or react with heat inside the human body.

Since the problems were discovered in the fall of 2019, thousands of former Zantac (ranitidine) users have contacted Zantac lawyers investigating claims for cancers diagnosed in prior years. Zantac-related cancer concerns include these cancers that appear to be developing long after former users last took the drug:

Judge Rosenberg has ordered the parties to conduct a census for the roughly 500 Zantac lawsuits filed so far in his court so far. The plan is to gather information on both filed and unfiled claims which are still under investigation by lawyers nationwide. Tens of thousands of Zantac cases are believed to be registered so far. Given the wide use of Zantac for more than two decades by millions of Americans, the Zantac litigation could become one of the largest active mass tort litigation courts established for a pharmaceutical drug in the U.S.

Each Zantac complaint raises similar allegations. Each alleges that the drug makers knew or should have known that ranitidine in Zantac was inherently unstable. Each also alleges that Zantac makers continued to market and sell the drug for decades despite what the drug makers and distributors knew or should have known. Zantac makers exposed users throughout the U.S. to an increased risk of cancer that may continue for years. several Zantac class action lawsuits have also been filed seeking compensation for medical monitoring of former users.

If Zantac settlements are not reached, Judge Rosenberg will likely establish what are informally known as bellwether trials to be heard in the federal MDL. Bellwethers help parties gauge how juries are likely to respond to testimony and evidence which is often repeated throughout similar claims.