Xarelto  carries the potentially lethal side effect of uncontrollable bleeding with no antidote. Approved in 2011, Xarelto (rivaroxaban) is a new generation anti-coagulant, or blood thinner. It is made by Big Pharma giant Bayer and marketed in the U.S. by Johnson & Johnson subsidiary Janssen Pharmaceuticals.

Hundreds of people have died or suffered serious bleeding events as a result of a taking the similar blood thinning drug Pradaxa. Several hundred Pradaxa lawsuits have been filed in the U.S.  The company making Pradaxa – Boehringer Ingelheim – is working to settle those cases with victims and/or their survivors.

Xarelto may be as dangerous as Pradaxa. It’s fair to say that Xarelto dangers rival Pradaxa. Several deaths and/or serious bleeding events were linked to Xarelto in 2012. Additionally, the FDA has also received reports of Xarelto causing the type of dangerous blood clots it was designed to prevent. See the FDA’s boxed warning here. Also see the FDA’s letter regarding the most serious and most common risks of Xarelto.

Anti-coagulants explained by a Doctor

People who suffer serious side effects from Xarelto can incur medical debt from hospital care, along with expensive trips to the emergency room. Work time missed for recovery from Xarelto injuries can cause further financial losses.

Those who become caretakers for loved ones hurt by Xarelto can also suffer, not only financially for their time sacrificed, but also emotionally. In the worst Xarelto injury cases, family members must cope with the loss of a loved one and suffer additional burdens of funeral expenses for the victim of uncontrolled bleeding caused by this blood thinner.

If you or a loved one has suffered from bleeding, blood clots or other side effects caused by Xarelto, you may be eligible for financial compensation. Contact us for a free legal consultation. 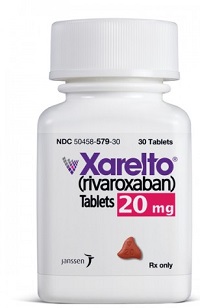