EPA scientists say chlorpyrifos  pesticide is unsafe at any level; so why is it not banned? 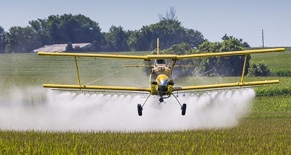 Chlorpyrifos’ nerve-damaging properties are well known.  The chemical is an organophosphate derived from a nerve gas first developed by Nazis during World War II. The German military used it to incapacitate or kill their real or imagined enemies. Chemical companies that made it during the war promoted it after the war –along with new chemical farming methods — in order to continue to turn profits.

EPA ignores its own Scientists

The truly shocking part of the story is that tons of this poison are still being sprayed across millions of acres of United States farmland every year, almost five years after the EPA discovered that it should be banned, nearly 20 years after the EPA banned it for residential use.

In 2014, the EPA proposed a complete federal ban on chlorpyrifos after the agency’s own scientists determined that children and developing fetuses faced substantial risk from exposure. So what changed? The feds reversed  the proposal soon after President Trump took office. For true right wing ideologues, anything that represents “regulation” is wrong. Banning chlorpyrifos would have been a form of “regulation.” The Trump administration’s move to halt a chlorpyrifos ban stretches back to Trump’s first corrupted toxic EPA head, Scott Pruitt. But even after Mr. Pruitt was forced to resign in disgrace, the anti-regulation policies he championed — for his corporate sponsors, just as he did as Attorney General of Oklahoma — continues.

Reason and common sense be damned: regulation ideology rules the day. EPA officials in charge of forcing Mr. Trump’s edict no claim that the data on chlorpyrifos is insufficient and unreliable. The obvious problem with that stance is that it  simply denies well-established scientific opinion and years of careful study by the EPA’s own experts. Do we live in a sane world? Why is chlorpyrifos pesticide not banned?

Since the federal government now evades its responsibility for regulating poisons in our air, food, and water, individual states have tried to take action to protect their own citizens. California and Hawaii (which has fought Monsanto’s poisoning of its land and people for years) have issued statewide bans. Several other states, including New Jersey, are taking similar steps.

New York state’s attorney general has filed a lawsuit against the EPA. New York  charges that the EPA broke the law when it reversed its proposed federal ban on chlorpyrifos.  The New York State Legislature passed a bill to ban the chemical, with both parties supporting the ban.

The American Academy of Pediatrics and nearly 100 other medical, consumer, and environmental organizations, including supported the measure.

New York Gov. Andrew Cuomo vetoed his state’s bill to ban chlorpyrifos, but he promises to institute a chlorpyrifos ban by July 2021.  He says he wants to accomplish the goal through regulations, not legislation. The problem with that tack, says a New York Times editorial from Dec. 2019, is that regulations are much more “vulnerable to legal challenge and other stalling tactics, including regulatory hearings that could take years even to schedule, than actual laws.”  “It’s hard to see why the governor would forgo the latter option,” wrote N.Y. Times editors, “especially when he had it sitting right in front of him.”

One can only wonder if the governor is hung up on gymnastic semantics that corporations have learned to turn in order to control  politicians. The last thing any Republican political operative  wants, and even the last thing most Democratic ops want, is to be identified with “regulation.”  The mere mention of the tortured buzzword “regulation” can send every politician in the room scurrying for cover.

A deep-pocketed chemical industry lobby force and some corporate farmers who have lobbied hard against banning chlorpyrifos insist that no effective alternatives exist. We know that’s simply not true. Chlorpyrifos was recently banned in the European Union without any significant fallout, except for the lightening of some chemical industry profits. Many farmers in the United States and elsewhere have already started to replace it with safer alternatives. California has provided  nearly $6 million to help develop safer alternatives. And nothing prevents farmers from going organic, except for the threat to Bayer/Monsanto, Dow, and other chemical company profits.  The larger problem is that so many farmers have become so beholden to chemical farming profits themselves that they now apparently cannot imagine a world where poison chemicals no longer drench most of the food grown in the country. It wasn’t always like this, and it doesn’t have to be like this now. Cleaner, better food is possible.

It’s not only children whose mothers live or work near chlorpyrifos poison-sprayed fields while they are pregnant who are in danger.  The EPA has found that young children everywhere are exposed to chlorpyrifos. Children are exposed  at levels 140 times higher than the EPA’s safety threshold simply by eating.

Censorship from the Trump Administration

The Trump team also  blocked the release of a federal report indicating that chlorpyrifos poses a direct threat to more than 1,000 species that are already at risk of extinction.  The New York Times notes that Corteva Agriscience (a division of Dow), the pesticide’s maker, donated $1 million to Mr. Trump’s inauguration committee.

Candidate Trump promised to drain the D.C. swamp, which, as everyone knows, is a swamp precisely because money trumps reason, common decency, and the protection of working class people.  We are not — here or anywhere else — jumping on the never-Trump bandwagon. But as far as the case of chlorpyrifos is concerned, it’s awfully easy to conclude that money “trumps” common sense, reason, and basic human decency.

The EPA is supposed to be working for the people of this country, not against them, at the behest of large chemical company donors. At the most basic level, is it too much to ask of the agency that it follow the research and the recommendations of its own scientists?