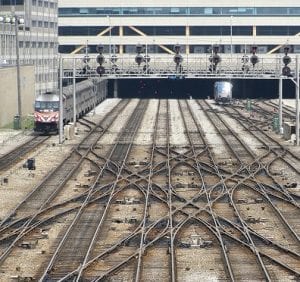 Two New York City-area engineers who crashed their trains in 2016 suffered from undiagnosed sleep apnea.  Neither has a memory of the crash he caused.  That was the finding of the National Transportation Safety Board.  The crashes – in Hoboken, New Jersey and Brooklyn, New York – killed one person and injured 200.

Both trains were moving faster than double the posted speed limit, the Associated Press reported. Each crashed at a station that had been exempted from federal regulations which require automatic speed controls that could have slowed or stopped them. The NTSB documents were made public Sept. 21, 2017.

NTSB said the common circumstances of the two accidents – the Sept. 29, 2016 New Jersey Transit crash in Hoboken, New Jersey; and the Jan. 4, 2017 Long Island Rail Road crash in Brooklyn – warranted combined findings and recommendations into one report slated for release in 2018.

The 2,500 pages of documents released Sept. 21 included medical reports and interview transcripts.  They show what investigators have learned but don’t include crash causation conclusions.

Sleep Apnea Controversy Rages
The sleep apnea findings inflame the debate over whether or not to require testing for the malady in train engineers and OTR semi-truck drivers. Sleep apnea harms one’s ability to get needed rest, which most reasonable people would agree is important for a train engineer or a truck driver.

The Obama administration had introduced legislation to require train engineers and truck drivers to be screened for sleep apnea; but the Trump administration reversed course.  Many OTR truckers have fought the screening measure because they would suffer the costs of it, estimated at $1,000-$2,000 per person.  Senate Minority Leader Chuck Schumer (D-N.Y.) has pushed for government-mandated screenings.  Mr. Schumer called the Trump administration’s decision to abandon a plan to enact a sleep apnea testing requirement “unconscionable.”

“We can’t have train engineers with undiagnosed sleep apnea at risk of falling asleep at the switch,” said Mr. Schumer.

Sleep Apnea affects Waking Hours
Sleep apnea can affect the afflicted even during waking hours, leading to drowsiness.  Sufferers are repeatedly awakened as their airways close and breathing stops.

Former Federal Railroad Administrator Weighs In
Former Federal Railroad Administrator Sarah Feinberg issued a safety advisory in December 2016 that urged railroads to test for sleep apnea.  Ms. Feinberg argued that the Hoboken and Brooklyn crashes were “further confirmation” that undiagnosed and untreated sleep apnea “is a danger to rail passengers, subway commuters and everyone on America’s highways.”

NTSB – Sleep Apnea caused Highway, Rail Accidents
The NTSB has blamed sleep apnea as the probable cause of ten highway and rail accidents in the past 17 years.

Morbid Obesity raised Sleep Apnea Risk
NTSB records show the Hoboken and Brooklyn engineers both had the sleep apnea risk factor of morbid obesity, but neither had been diagnosed with that disorder either, until after their crashes.  Both engineers are now being treated with pressurized breathing masks.

NJ Transit engineer Thomas Gallagher – 6 feet tall and 322 pounds – told investigators he only remembered looking at his watch and the speedometer and activating the horn and bell before his packed rush-hour train slammed into Hoboken Terminal.  Then 48, he told investigators the next thing he remembered was a “loud bang.”  Meanwhile, a conductor standing on a platform told investigators he couldn’t see the engineer through the cab window as the train hit the station at more than double the 10 mph speed limit.  That means Mr. Gallagher may have slumped down or fallen.

Falling debris killed a woman on a platform, and the crash hurt 110 people aboard the train.

The morbidly obese train engineer in the Long Island Railroad crash told investigators he only remembered approaching the terminal and then getting thrown from his seat in the crash. His train was going 13 mph in a 5 mph curve when it hit a bumping post at the end of the tracks.
The engineer said he was unaware of the impending crash, which launched the lead car into the air and on top of the concrete platform. His crash hurt more than 100 people.

“I didn’t know what the hell was going on,” the engineer said. “I remember being thrown from the seat because I was into the dashboard area, and just, you know, screaming and smoke, and people were laying on the floor in front of me.”