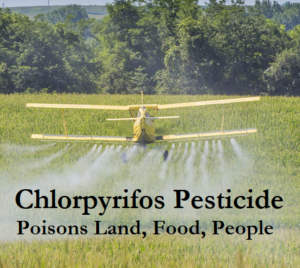 (April 1, 2020) Several U.S. senators last March introduced legislation to protect the health and safety of children, farm workers, and families across the country from a dangerous nerve agent found on fruits and vegetables, and in drinking water. The senators introduced the bill on the second anniversary of disgraced EPA Administrator Scott Pruitt’s denial of a citizen’s petition to ban chlorpyrifos.

Under Scott Pruitt, and now under acting EPA head Andrew Wheeler, the agency has refused to ban chlorpyrifos despite overwhelming scientific evidence that it endangers public health. The senators also point out that Department of Interior Secretary David Bernhardt blocked a report that found chlorpyrifos to be so toxic as to threaten the existence of more than 1,200 endangered species.

Dow has even announced it will stop making chlorpyrifos, yet these industry-captured government bureaucrats still fail to ban the poison.

Sponsored by Senator Tom Udall (D-N.M.) and co-sponsored by Sen. Bernie Sanders (I-Vt.), the legislation seeks to ban chlorpyrifos because it is a dangerous neurotoxin linked to brain damage in children. Several studies show it causes serious harm to human health and wildlife.

The senators’ Protect Children, Farmers and Farmworkers from Nerve Agent Pesticides Act of 2019 would amend both the Federal Insecticide, Fungicide, and Rodenticide Act. It would prohibit the registration of pesticides containing chlorpyrifos and the Federal Food, Drug, and Cosmetics Act by prohibiting all uses of chlorpyrifos on our food. The act would outlaw chlorpyrifos, ban it entirely.

In 2017, EPA Administrator Scott Pruitt rejected calls to ban chlorpyrifos, even though the agency’s own scientists determined there are no safe levels for it in food. Pruitt claimed the science wasn’t settled and put off the decision until 2022. His pronouncement came just weeks after he met with chlorpyrifos’ maker, Dow Chemical. So now families across the country continue to be exposed to this toxic nerve agent through poisoned food and unsafe drinking water. Children, farmers, and farmworkers living in rural Latino communities face disproportionate risk of exposure, but virtually all of us have been exposed to this poison in varying degrees.

“The science on chlorpyrifos is clear and unambiguous. This is a dangerous nerve agent and toxic pesticide that damages the developing brains of children and causes serious health problems in those who have been exposed to it, whether it’s on the job, on fruits and vegetables, or in drinking water. (It) is past time for (this) brain-damaging chemical to come off our food, off the shelves, and off the market. (The) EPA continues to (protect) the profits of Dow Chemical over the health of children, farmworkers, and families. We can’t sit around and wait for the EPA to stop dragging its feet while vulnerable families and precious wildlife are poisoned — Congress must act. . .” [A year later, Congress has yet to act on the bill.]

“Chlorpyrifos poisons people – particularly children. (As) a parent, let alone a public official, that says enough. We have an obligation in the Congress to do the right thing to protect people from this neurotoxin. (This) nation has an obligation to do better than allow this neurotoxin to continue poisoning children, workers, and other victims.”

“This pesticide can do major harm, especially to young people and farm workers.  It has no place on the market.  That’s why I’m proud to join a leader on chemical safety in Senator Udall to introduce this important legislation – and take action when Donald Trump’s corporate-controlled EPA won’t.”

“The EPA should have banned chlorpyrifos a long time ago, but it has bowed to industry pressure and now Congress must act. This pesticide is sickening our children, our workers and our farmers. The public has waited too long for its health to be put ahead of corporate profits.”

Chris Van Hollen: Chlorpyrifos has no place on farms or tables

“Chlorpyrifos has no place on our farms or our kitchen tables. This harmful chemical has been proven to cause serious brain damage and developmental disorders in children who are exposed either through proximity to farm work or by consuming contaminated fruits and vegetables. It’s clear we need to get it off the market. The EPA’s negligence under President Trump is extremely disturbing. Congress must fight back. I urge my colleagues to take up this legislation immediately.”

Evidence of chlorpyrifos’ toxicity has continued to build since at least 2000, when the EPA banned it for home use. By 2017, experts discovered that prenatal exposure, even at low levels, puts children at risk for serious cognitive and behavioral deficits, as well as neurodevelopmental disorders.

Based on overwhelming findings that chlorpyrifos is unsafe for public health and particularly harmful to children and farmworkers, the U.S. Court of Appeals for the Ninth Circuit ordered the EPA to move forward with a ban on chlorpyrifos. The court stated in 2018: “[T]he time has come to put a stop to this patent evasion” of the law. Instead of complying with the court’s order, the EPA chose to appeal the ruling.

In addition, a recent New York Times report revealed that the Department of the Interior (DOI) intervened to block the release of a U.S. Fish and Wildlife Service report that found that two pesticides, malathion and chlorpyrifos, were “so toxic that they ‘jeopardize the continued existence’ of more than 1,200 endangered birds, fish and other animals and plants.” Led by former lobbyist and then-Deputy Secretary of the Interior David Bernhardt – now President Trump’s nominee for Interior Secretary – the DOI reportedly made concerted efforts to undermine these findings. The DOI “set in motion a new process intended to apply a much narrower standard to determine the risks from the pesticides.” It did so despite the established fact that chlorpyrifos presents an existential threat to thousands of species of animals and plants.

See a full list of organizations supporting the litigation.

“This bill comes at a crucial time when scientific integrity and the protection of the public is compromised by industry collusion with the administration,” said Andrea Delgado, Legislative Director of the Healthy Communities program at Earthjustice. “The most exposed and vulnerable among us are our children, farmworkers and families in rural communities, and they deserve action now. We commend Senator Udall and his colleagues for putting the health of the people over the wealth of the chemical industry.”