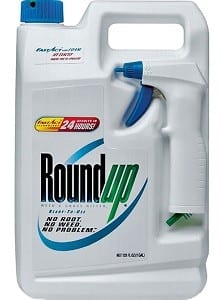 (Updated Jan. 23, 2020)A Monsanto Roundup Lawsuit attorney pursues cases against Monsanto, now owned by Bayer. More than 40,000 people have filed suit against Monsanto over Roundup. They all allege that exposure to Roundup herbicide caused them or their loved ones to develop non-Hodgkin lymphoma or other cancer(s). They charge that Monsanto covered up the risks. Roundup (with glyphosate)  was declared a “probable human carcinogen” by the World Health Organization (WHO) in 2015.  Hundreds of studies around the world have linked glyphosate and Roundup to non-Hodgkin’s lymphoma (NHL), chronic lymphocytic leukemia (CLL), small lymphocytic lymphoma, and several other types of cancer related to non-Hodgkin’s lymphoma.

As a result of those damning studies, our law firm in Houston, Texas is filing lawsuits against Monsanto for people who developed non-Hodgkin’s lymphoma after being exposed to Roundup. Matthews & Associates is pursuing Monsanto Roundup lawsuits in all 50 states and Puerto Rico.  If you’ve been diagnosed with non-Hodgkin Lymphoma (NHL), Chronic Lymphocytic Leukemia (CLL),  B-Cell Lymphoma, or another NHL-related cancer, contact a Monsanto Lawyer for a free legal consultation regarding a potential Monsanto Roundup Cancer Lawsuit.

Several long-term experiments on human populations now show a clear link between Roundup and cancer, birth defects and kidney disease.  The World Health Organization and the American Cancer Society recently announced that glyphosate in Roundup is probably carcinogenic.  Roundup, however, is the larger concern.  Evidence shows that Roundup is many times more toxic than glyphosate alone. Monsanto tested only glyphosate before unleashing Roundup and many other glyphosate-containing pesticides on the market.

Glyphosate has been linked to several types of cancer, including:

What is Monsanto’s Roundup?

Roundup is an herbicide

that kills most living things not genetically engineered to withstand it.  Monsanto promotes Roundup-ready corn, soy and other genetically modified organisms (GMOs) on the promise that GMO’s require less herbicide than traditionally-farmed plants (organic farming uses no herbicides).   Monsanto also claims GMO’s can be made more resistant to drought.  The reality is far from the promise.

Monsanto’s grandiose claims for Roundup and glyphosate include the falsehood that glyphosate targets an enzyme found only in plants but not in pets or people.  Monsanto is being sued for this blatantly false advertising.  The New York attorney general won a lawsuit against Monsanto in 1996 that made the chemical giant stop making all sorts of false claims about Roundup, though those false claims remain on Roundup labels in every other state in the country.

Monsanto’s GMO products and chemical farming methods have also spawned superweeds that many farmers have tried to battle by applying greater and greater amounts of Roundup.  In addition, GMO seeds can require enormous amounts of water to grow their plants, at a time when potable water has become more valuable than oil throughout the world.  The terminator seeds which Monsanto produces contain the herbicide in the plant itself, so that anyone eating GMO plants is ingesting pesticide directly, destroying the natural balance of the human gut.  These terminator seeds continue to wreak havoc in the human and animal gut long after they have been ingested.

(glyphosate) is the most widely-used herbicide (weed-killer) in the world.  It is used on countless lawns and gardens, school playgrounds, orchards, parks, and  80% (or so) of corn and soybeans grown in the U.S.

Glyphosate, Roundup’s main active ingredient, was commercialized by Monsanto in 1974.  It works by specifically inhibiting an enzyme essential to plant growth.  That same enzyme is also essential to the growth of animals, including humans.  Monsanto claims that this enzyme is found only in plants but not in animals or humans. This is a blatantly false claim for which Monsanto is being sued in California. 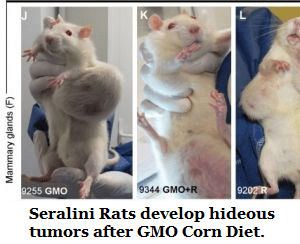 have been shown to develop hideous tumors.  (See PDF) The Monsanto-backed detractors who now attack Gilles-Eric Seralini – the man who co-authored the famous rat tumor studies – say the rat study is too small, or that rat data can’t be applied to humans.  Rats are used in countless studies for  humans, and in nearly every case when a clear cancer link has been proven, the product in question has been banned from the market. Or the cancer-causing product has at least been forced by FDA to include a warning. No such warning exists for Monsanto and its toxic GMO crops. Monsanto was allowed by the FDA to elude any meaningful regulations when it unleashed Roundup/glyphosate on Americans three decades ago. The agency simply perused the scant short-term “safety” research Monsanto had done on its own GMO’s, ignored all the cancer-related warning signs, then gave Monsanto carte blanche to unleash all the GMO corn, soy, and other toxic products that it wished on the U.S. 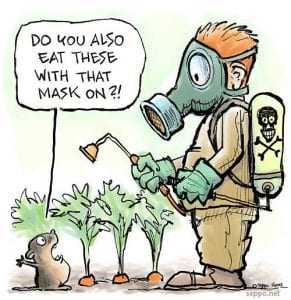 we have the advantage of seeing the health impacts wrought by Monsanto’s Roundup and the FDA’s rubber stamping of GMO foods in the U.S. Three decades worth of studies on Monsanto’s herbicide Roundup (Glyphosate) have now demonstrated a clear link between Roundup and non-Hodgkin lymphoma (NHL).  A paper published in April 2014 details the study and the proof that glyphosate causes non-Hodgkin lymphoma.  The paper gives a systematic review and a series of meta-analyses of nearly 30 years of “epidemiologic research on the relationship between non-Hodgkin lymphoma (NHL) and occupational exposure to agricultural pesticide active ingredients and chemical groups.”

Several studies of occupational glyphosate exposure in the U.S., Canada and Sweden found increased rates of non-Hodgkin’s lymphoma even after adjustment for other pesticides:

working for the Agency for Toxic Substances and Disease Registry, a branch of the US Department of Health and Human Services, published the results of the US Atlantic Coast Childhood Brain Cancer Study in 2009.  Children with brain cancer from Florida, New Jersey, New York and Pennsylvania were compared to age matched controls.  The researchers found that if either parent had been exposed to Roundup during the two years before the child’s birth, the chances of the child developing brain cancer doubled.  Other research reveals glyphosate inhibits cytochrome P450 (CYP) enzymes, a big, diverse group of enzymes that catalyze the oxidation of organic substances.  The authors wrote this is “an overlooked component of its toxicity to mammals.”  CYP enzymes function to detoxify xenobiotics – chemical compounds found in living organisms that are not normally produced or consumed.  Glyphosate limits these enzymes’ ability to detoxify foreign chemical compounds, increasing the harmful effects of chemicals and environmental toxins.

Monsanto was sued in California state court in April 2015 for false advertising.  Roundup labeling claims glyphosate targets an enzyme found only in plants but not in people or pets. The lawsuit states this claim is false, and that Monsanto’s carcinogenic glyphosate destroys healthy human gut flora and leads to  myriad health problems that include:

Professional new reporters Jane Akre and Steve Wilson were fired from a Florida news station in 1998 after Monsanto threatened their station manager for a story uncovering a cancer link with bovine growth hormone (rBST) shot into cows to force them to produce more milk. Monsanto has, from the beginning, threatened and bullied honest researchers and reporters, while buying influence in the U.S. Government.  President Obama, sadly, was solidly behind Monsanto.  Supreme court Justice Clarence Thomas is a former Monsanto lawyer who has ruled in favor of Monsanto in every Monsanto-related case that has come before the Supreme Court.

Matthews & Associates Law Firm is investigating Monsanto injury cases.  If you or your loved ones have been injured by Roundup Ready/glyphosate,  diagnosed with non-Hodgkin Lymphoma, Hairy Cell Leukemia, or Chronic Lymphocytic Leukemia, contact a lawyer at Matthews & Associates Law Firm for a free legal consultation regarding a potential Monsanto Lawsuit.