Please note: We are no longer accepting Juul or E-Cigarette cases. 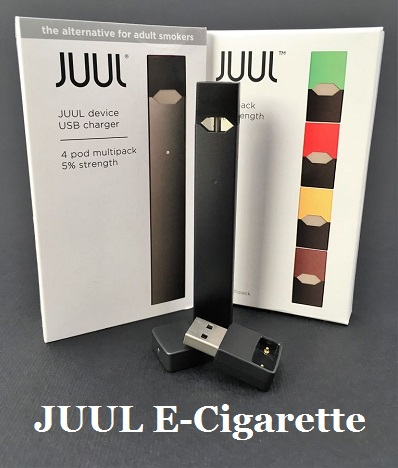 Those dangers include nicotine addiction and an increased risk of strokes, seizures, and serious lung infections.  Absent real warnings from the makers of e-cigarettes, on December 18, 2018, the U.S. Surgeon General issued a warning to the American public regarding the dangers of e-cigarettes, particularly in reference to the increase in teenage use:

“We need to protect our kids from all tobacco products, including all shapes and sizes of e-cigarettes,” said Surgeon General Jerome Adams. “We must take action now to protect the health of our nation’s young people.” The warning advisory mentioned the Juul e-cigarette brand several times because of its popularity with underage people in high schools and junior high schools.

In California this summer (where Juul is headquartered), a 22-year-old Connecticut man sued Juul for causing him to suffer a stroke. In Wisconsin this month (August 2019), CBS News reports that at least a dozen people have recently been hospitalized and treated for severe lung damage. Wisconsin’s Department of Health Services confirmed 12 vaping injury cases and is investigating 13 others for people experiencing lung damage as a result of vaping, according to The Milwaukee Journal Sentinel.

Dr. Diana Zuckerman, president of the National Center for Health Research, told CBS News: “The vast majority of people who smoke started as children or as young teens, and yet you don’t hear about people getting lung cancer until their 40s, 50s, 60s. Think about that compared to what’s happening to these kids now. I’ve never heard of a smoker ending up in the hospital in their teens.”

Dr. Zuckerman pointed to the case of a college freshman from Florida whose lung collapsed. In an interview with The Daily Mail, the teen admitted to vaping about one JUUL pod every two days for a year. Many Juul users vape a lot more than that.

If you or someone you love has suffered a stroke or been hospitalized for lung damage or another injury related to using Juul e-cigarettes, contact an attorney now for a free legal consultation regarding a potential lawsuit against Juul. Vaping is far from harmless. Those responsible for enticing young people into becoming hooked on the unhealthy habit should be held accountable.

Made by Juul Labs, Juul is the popular USB-shaped smoking device that has captured the lion’s share of the e-cigarette market. Juul’s sleek concealable shape and its variety of flavors make it the e-smoking choice for many adults and teens. The problem is that Juul Labs’ claim that “Juuling” is a safe alternative compared to smoking real burning cigarettes doesn’t hold water. Recent studies have found that Juul and other e-cigarettes expose users to several dangerous health risks commonly associated with traditional cigarettes. In addition, researchers have also found links to e-cigarette risks not usually associated with traditional cigarettes. One study found that e-cigarette users are more likely to develop into real cigarette smokers. So contrary to some of Juul’s disingenuous marketing to teens, rather than diverting from cigarette smoking, vaping among those who had not smoked real cigarettes before made them more likely to start smoking.

E-cigarette users have a higher likelihood of developing bronchiolitis obliterans (better known as “popcorn lung“). Though research into Juul is still in the early stages, some litigation experts are already advising personal injury law firms to prepare for a huge influx of e-cigarette lawsuits. The continued rise in Juul’s popularity, along with continued research that shows Juul’s health risks, makes future Juul lawsuits increasingly likely.

Those using Juul or any other form of e-cigarette should conduct their own research on e-cigarette dangers before continuing to use these troubling products in the hope that they are less dangerous and less addictive than regular garden-variety cigarettes.

Some Volatile Chemicals in E-Cigarettes

The National Institutes of Health says e-cigarettes often contain ingredients such as propylene glycol (PG) and glycerol, mixed with concentrated flavors, and usually some nicotine. Quantitative and qualitative studies show a wide variety of chemical components in e-cigarette cartridges, refill solutions, and aerosols. Herrington and Myers (2015) detected approximately 60 to 70 compounds (some identified, some not) in each liquid they tested. Additionally, more compounds appear in the aerosols, as the vaporization process generates some chemicals. One aerosol generated from a single product tested by Herrington and Myers (2015) showed 18 additional compounds observed in the solution.

The NIH further writes: “Most reviewed studies have evaluated nicotine and impurities in the liquids such as TSNAs and nicotine-related impurities, while other studies have focused on identifying potentially harmful chemicals in the aerosol, such as carbonyl compounds, VOCs, TSNAs, metals, and silicates. Various chemical substances and ultrafine particles known to be toxic, carcinogenic, and/or to cause respiratory and cardiac disease have been identified in e-cigarette aerosols, cartridges, refill liquids, and environmental emissions. Some of the identified TSNAs, aldehydes, metals, VOCs, phenolic compounds, PAHs, and tobacco alkaloids are harmful or potentially harmful constituents.”

CBS also reported that a study published in the journal Pediatrics in 2018 found many toxic chemicals in e-cigarettes, including one linked to several types of cancer. Some of those chemicals appeared even when teens used non-nicotine vaping products like fruit-flavored ones.

E-cigarettes have become extremely popular in recent years, with e-cigarette use increasing 10-fold between 2011 and 2016. As of summer 2019, Juul commands more than 50% of the e-cigarette market, which is expected to be worth $86.43 billion by 2025.

Is Juul a “Healthy Alternative” to Smoking?

Several factors have helped Juul break through the flooded e-cigarette market and establish Juul as the leading e-cigarette brand. The biggest contributing factor has been Juul Labs’ successful ‘healthy alternative’ advertising campaign. Like most ad campaigns, there’s a huge gap between the promise and the reality of the product advertised.

Through its misleading ad campaigns, Juul Labs advertises its staple product as a safe alternative to traditional cigarettes. Juul also claims its product presents an effective way to quit smoking. However, according to a study published in the American Journal of Physiology, the chemical flavorings and additives in e-cigarettes can potentially cause more damage to the lungs than the damage caused by conventional cigarettes. That fact alone hardly makes Juul a healthy alternative. Any lung damage can be everlasting.

Additionally, the nicotine concentration in each Juul pod is also a major concern.

Although Juul advertises its e-cigarettes as both a safe alternative to cigarettes and an effective way to quit smoking, neither of these claims are supported by fact.

There is no evidence to support the claim that Juul is a reliable tool for quitting smoking. On the contrary, Juul delivers as much, if not more, nicotine than cigarettes. Because nicotine is the substance responsible for giving cigarettes their addictive nature, there is no reason to believe that Juul will help alleviate addiction. To that end, some other e-cigarette brands offering lower mg/ml of nicotine may be more beneficial in lowering nicotine dependence.

A research study has revealed that high levels of nicotine concentrations found in Juul e-cigarettes are “sufficiently high to be cytotoxic, or toxic to living cells when tested in vitro with cultured respiratory system cells.”

Among hundreds of electronic cigarette products a research team analyzed, Juul was the only product with high enough nicotine concentrations to be toxic in standard cytotoxicity tests.Of the eight different flavors made and sold by Juul Labs, the study found differing levels of cytotoxicity.

Research team leader Prue Talbot, professor in the Department of Molecular, Cell and Systems Biology at the University of California, Riverside, reported:  “We found some flavor chemicals, such as ethyl maltol, also correlate with cytotoxicity, but nicotine seems to be the most potent chemical in Juul products, due to it very high concentration.”

Federal regulations limit the sales of Juul products to people 21 and older, but Juuling still remains prominent among adolescents, primarily those in middle- and high-schools.

Another member of the e-cigarette research team, James F. Pankow, a professor of chemistry as well as civil and environmental engineering at Portland (Oregon) State University, explained that experts are still unsure of the long-term adverse health effects of chronic Juul use.

Meanwhile, a growing concern obtains among experts and the FDA that the high doses of nicotine found in Juul products could affect the still-developing adolescent brain, especially when considering the cytotoxic effects Juul products have been found to have.

The health risks of e-cigarettes differ depending on the brand. E-cigarettes, whether Juul or any other brand, still put the user at risk of developing a serious and potentially fatal injury.

Diacetyl is a harmless additive in its natural form, but when heated to enhance the flavoring of e-liquids, diacetyl is transformed into its hazardous vaporized state.

Previous research has been conducted on  diacetyl. Multiple studies have linked vaporized diacetyl to the medical condition bronchiolitis obliterans (popcorn lung), a degeneration of the lungs that can result in total respiratory failure and even death. The dangers of diacetyl were only uncovered after researchers learned that foods containing diacetyl posed a threat to consumers, prompting research into the dangers of diacetyl in e-cigarettes.

A study published in the American Journal of Physiology, conducted by medical investigators at the University of Athens, Greece, found that when vaporized, the chemical flavorings and additives can cause inflammation in the lungs. Researchers say that even short-term e-cigarette use can induce significant lung damage. Although this inflammation does not appear to pose a cancer risk, several other serious health risks are linked with this type of respiratory assault.

This first-stage exploratory research, which was conducted on lab mice, should have begun years before e-cigarettes gained market approval.

E-cigarettes hit the market circa 2006, before research could determine the potential problems, explained Dr. Patricia Folan, director of the Center for Tobacco Control, a division of Northwell Health in Great Neck, New York. She said the manufacturers told us these products were safe.

E-cigarette makers never tested the potential health risks of their products. They based their safety claims about these flavorings and additives on previous approvals made by the FDA for a variety of food additives. These flavorings and additives were deemed safe for consumption, but no tests were ever conducted on the long-term effects of inhaling these chemicals in a vaporized state. Only now, more than a decade later, are the first third-party researchers exposing the health risks.

It may be too late for many. The long-term effects of human exposure to these heated chemicals could be detrimental to the millions of U.S. smokers who have made the switch to e-cigarettes.