IVC filters, allegedly designed to stop blood clots, can break off and migrate into the heart, lungs and other vital organs. IVC filters can cause fatal injuries. The medical literature shows a significant statistical rate of IVC – Inferior Vena Cava – filter failure, fracture, device migration, embolization (movement of the filter or fractured fragments to the heart or lungs), perforation of the IVC, and other problems.

No Evidence of Benefit for IVC Filters

The Journal of the American Medical Association (JAMA) has reported that IVC blood clot filters show evidence of harm with no evidence of benefit. Bard  Recovery IVC filters may even be fatally flawed. An IVC Filter Lawsuit Lawyer may be able to help with a free legal consultation if you or someone you know has been implanted with an IVC filter.

If you have been injured by a blood clot filter, or had an IVC filter installed which migrated and could not or cannot be safely removed, contact an experienced IVC Filter Lawyer for a potential Bard IVC Filter Lawsuit, or a Bard Recovery Blood Clot Filter Lawsuit. Please view our testimonials to see how we have helped others injured by dangerous medical devices and pharmaceutical drugs.

The FDA updated a 2010 safety communication in May 2014 regarding device removal complications. FDA has received more than 1,000 reports of serious adverse events related to Bard IVC Filters. Reports include 328 for device migration, 146 for embolizations (device component detachment), 70 for perforation of the IVC, 56 for filter fracture. Similar problems have been found with other IVC filters made by Cook Medical, Boston Scientific, B. Braun and others.

What is the Vena Cava?

ilters are tiny umbrella skein-like devices inserted into the inferior vena cava to capture blood clots and prevent them from reaching the lungs or heart.  IVC filters are often put in patients at risk for pulmonary embolism (PE, or a blood clot in the lungs) when anticoagulant therapy is ineffective or contraindicated. If patients require long-term protection from PE, surgeons may implant permanent IVC filters. If people require short-term protection, doctors may implant retrievable IVC filters. In theory, the latter are designed to allow device removal once PE risk subsides.

Contact an experienced IVC filter attorney at Matthews & Associates for a free legal consultation if you believe you may have cause to pursue a Bard IVC Filter Lawsuit or a Blood Clot Filter Lawsuit against the makers of a blood clot filter.

In August 2010, FDA issued an initial warning against leaving inferior vena cava filters implanted in patients for extended periods due to their potential to cause adverse health complications. (See the PDF.) The FDA warned that IVC filters are meant for short-term use only, and only for patients at risk for pulmonary embolism. FDA advised implanting doctors to remove the devices once PE risk subsides. The agency was concerned about doctors not retrieving IVC filters intended only for short-term placement, hence exposing patients to fractures and all the problems which can follow. 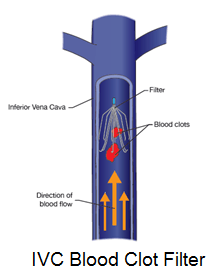 FDA said it has received “921 device adverse event reports involving IVC filters, 328 for device migration; 146 for embolizations (detachment of device components); 70 for perforation of the IVC; 56 for filter fracture.”  Some of these events led to problems for patients, according to FDA,  which also said the events could be related to a retrievable filter remaining in patients’ bodies beyond the time when pulmonary embolism (PE) risk subsided:

“The FDA is concerned that these retrievable IVC filters, intended for short-term placement, are not always removed once a patient’s risk for PE subsides. Known long term risks associated with IVC filters include but are not limited to lower limb deep vein thrombosis (DVT), filter fracture, filter migration, filter embolization and IVC perforation.”

The FDA warning followed a study by Dr. Nicholson and others which found a high prevalence of fracture and fragment embolizations with retrievable inferior vena cava filters. Nicholson’s study was used to challenge the FDA’s medical device approval process. The agency considers IVC filters as Class II devices, or low risk, clearing them without clinical safety or effectiveness data via the questionable 510k approval loophole.

Fracture of the IVC Filter can cause:
•  Perforation or puncture of the IVC
•  Serious damage to the heart
•  Damage to the Lungs or Vena Cava
•   Internal Bleeding
•   Cardiac or Pericardial Tamponade
•   Ventricle Tachycardia
•   Lower Limb DVT
•   Hematoma or Nerve Injury at the Puncture Site
•   Constant and Severe Pain in the Heart, Chest, elsewhere
•   Pulmonary Embolism
•   Infection
•   Death

A research team led by Dr. William Nicholson at York Hospital in Pennsylvania examined 80 patients who had been implanted with Bard IVC filters from 2004 – 2009. The 80 underwent a fluoroscopy to determine the structural integrity of the filter and investigate whether it had broken or was still intact. Patients whose devices were fragmented also underwent echocardiography and cardiac computed tomography.

The study’s results indicated 16%  – 13 of 80 patients – who received Bard Recovery and Bard G2 filters had at least one fracture. First generation Bard Recovery filters had a 25% (7 of 28) fracture rate, with embolizations to the heart occurring in five (5) cases. Of second generation devices (including the Bard G2 filter), 12%  – 6 of 52 – were found to have fractured. In two cases, the fragment inhibited blood flow, one in the vein coming out of the liver and one in the lungs. In the other four cases, the fragments stayed close to the filter.

The IVC filter study authors wrote that patients and their treating doctors needed to know the  device’s (previously) under-recognized and life-threatening complications. Educated patients can be alert to chest pain and other symptoms that should prompt immediate, life saving medical attention. They also concluded filter fragmentation could be directly related to the length of implantation:  “Patients and their physicians should be educated about this fact so that they have the opportunity to consider having the filter removed.”

In December 2005, FDA issued a nationwide Class I Recall for the Boston Scientific Stainless Steel Greenfield Vena Cava Filter. Recalled devices were made before March 10, 2004; they can be identified by product code M001505010. The recall resulted from numerous reports of detachment at the bond between the carrier capsule and the outer sheath of the filter’s delivery system during implant surgery, putting patients at risk of adverse cardiac events. Eight complaints were received; two involved severe injuries that needed intervention; one was reported as a death. Some 18,000 Boston Scientific IVC filters were affected by the recall.

In September 2012, a class action lawsuit filed against C.R. Bard over its Recovery and G2 IVC filters was removed from Florida state court to the federal court system. Attorneys for Bard filed a petition to have the case transferred to the U.S. District Court for the Southern District of Florida, which means that the company believes the class action will include more than 100 plaintiffs; that total claims could top $5 million; that members of the plaintiff class will be diverse from at least one defendant.

Many other Bard IVC filter lawsuits have been filed in Pennsylvania and California state courts. Each involves allegations that Bard knew – or should have known – about its products’ potentially serious side effects, yet failed to warn of them. The claims seek compensation for the medical monitoring patients will need to ensure their IVC filters have not fractured or embolized when they remain implanted. Some 100,000 Bard IVC filters have been implanted in patients around the country.

The Judicial Panel on Multi-District Litigation (JPML) issued an order (PDF) that centralizes 27 lawsuits pending in eleven district courts into the U.S. District Court for the Southern District of Indiana. Federal judges selected Indiana because half the lawsuits against Cook have already been filed  there.  Cook Medical headquarters is also in Bloomington.

JPML courts help eliminate duplicative discovery, prevent inconsistent pretrial rulings, and conserve the resources of all parties, their attorneys and the judiciary.

Cook Medical is accused of selling defective IVC filters and failing to sufficiently warn of safety risks. Most of the lawsuits involve the Günther Tulip and Celect filters.

According to the JPML: “The subject actions share factual issues arising from allegations that defects in the design of Cook’s inferior vena cava (“IVC”) filters makes them more likely to fracture, migrate, tilt, or perforate the inferior vena cava, causing injury.”

Cook Medical opposed centralization in an MDL. Its lawyers argued centralization would encourage plaintiffs to file meritless claims. Cook attorneys argued “perforation and fracture are extremely rare occurrences.”  They added that they will seek dismissal of claims by arguing that doctors were adequately warned about risks. This tactic is known as the “learned intermediary defense,” which says  the doctor was warned and has the duty to warn the patient, that the company has no obligation to warn the patient.

In a study published in 2013 in Cardiovascular and Interventional Radiology, researchers followed 50 patients who had been implanted with a Günther Tulip or a Celect filter between July 2007 and May 2009. After 71 days, all of the filters had some degree of erosion into the vena caval wall. In addition, 86% perforated the vena cava, 40% tilted into the vena cava.

See this list of IVC Filters and their manufacturers.

Attorney David Matthews is a member of the plaintiff’s steering committee (PSC) for the Cook Medical MDL in Indiana. He and other IVC Filter Lawyers expert in vena cava lawsuits at Matthews & Associates represent several plaintiffs in various IVC filter lawsuits. The firm is accepting new IVC filter injury cases in all 50 states and Puerto Rico.

Contact Matthews & Associates now for a free legal consultation regarding an IVC Filter lawsuit – or other IVC filter maker lawsuit – if you or a loved one has suffered complications from an IVC filter. Please view our Testimonials to see how we have helped others hurt by other dangerous medical devices and pharmaceutical drugs.

We will try to keep you up to date on any IVC Filter lawsuits, additional FDA IVC Filter warnings, and  IVC Filter recall announcements.