Gadolinium is used in some MRI dyes injected into  patients as a contrast agent.

Gadolinium-based contrast agents are used intravenously to enhance the detail and clarity of diagnostic MRI or magnetic resonance angiography.  Unfortunately, gadolinium dye can remain in the body following an MRI, and cause serious problems.

Until recently, most people did not have reason to contemplate a gadolinium MRI dye lawsuit.  Gadolinium was merely considered an element found on the periodic table with no widespread use.  However, gadolinium’s risks have begun to surface.  Thousands of people who undergo MRIs are at risk for serious, potentially permanent injuries.

Gadolinium MRI dye attorneys at Matthews & Associates are researching gadolinium in possible injury cases.  If  you’ve been injured as a result of being injected with gadolinium dye prior to an MRI or MRA, contact our gadolinium attorneys immediately for a free legal consultation. 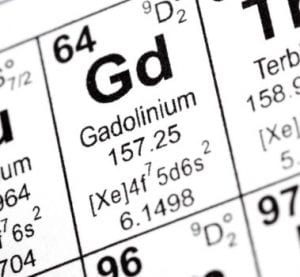 When a chelated dose of gadolinium is injected into an otherwise-healthy patient, 90 percent of it is eliminated by the kidneys within 24 hours after the examination, and the gadolinium causes no lasting problems. But someone with kidney problems may not be able to expel gadolinium quickly enough.  If and when that happens, the gadolinium eventually separates from its chelate.  That separation can result in prolonged exposure to the heavy metal, which can result in the development of Nephrogenic Systemic Fibrosis (NSF), formerly known as Nephrogrenic Fibrosing Dermopathy (NFD).

NSF is the most serious MRI/Gadolinium injury.   The Journal of the American Medical Association reports that NSF was first described in 2000 in a 15-patient case series.  JAMA notes: “Nephrogenic systemic fibrosis is an extremely debilitating, multisystemic fibrosing disorder. (More) than 300 cases have been recognized, and their histopathologic features have been categorized. Two known associations with NSF are renal dysfunction and exposure to gadolinium (Gd)–containing magnetic resonance contrast agents (GCCAs).”

First suggested by Grobner in 2006, according to JAMA, “multiple reports have also demonstrated the deposition of insoluble Gd phosphates in tissues of patients with NSF, further confirming the importance of toxic Gd3+ release from the chelated compounds occurring in some patients with renal failure.”

Nephrogenic systemic fibrosis can lead to total disability or death.

Other people injected with gadolinium prior to an MRI or multiple MRIs have complained of several physical maladies.  Gadolinium toxicity injuries can include:

Contrast Agents can remain in the Brain

The Mayo Clinic has recently found the potential for gadolinium residue to remain in the brains of people who have undergone multiple contrast-enhanced MRI exams.

Emanuel Kanal, M.D., director of magnetic resonance services and professor of radiology and neuroradiology at the University of Pittsburgh Medical Center, has said, “We now have clear evidence that the administration of various gadolinium-based contrast agents results in notably varied levels of accumulation of residual gadolinium in the brain.”

Dr. Kant said that gadolinium-based contrast agents have been valuable to patients worldwide, but doctors also can’t ignore the new findings and continue prescribing MRIs with gadoliniuim dye “without change.”

Published in the journal Radiology, the study strongly suggests that some types of contrast dyes used in MRI exams may remain in the brain for years, though long-term effects of the gadolinium are not fully understood.

The Journal of Practical Medical Imaging and Management offers a helpful look at gadolinium deposition disease. The authors reference an article in Magnetic Resonance Imaging that states:

“[T]he authors focus on GDD, a condition in which patients with normal renal function develop a variety of symptoms.  European-origin Caucasian women [like Chuck Norris’ wife, perhaps] are more susceptible to developing GDD.  The authors believe that patients with GDD develop an immunologic response that is dependent on the genetic susceptibility of an individual. Symptoms include bone pane, skin and subcutaneous tissue burning pain, and various intensities of what is described as “chemo brain” or “brain fog.” Progressive thickening and discoloration of the skin and subcutaneous tissue of the distal arms and legs can occur in late stage disease.Brain with Gadolinium Deposition Disease

GDD symptoms can occur within hours or days of gadolinium-based contrast agent injection. The authors believe GDD may be a blend of a polypeptide-mediated response with a cell-mediated subacute adverse event. They suggest that a patient with GDD may have a genetic abnormality in metabolizing heavy metals.

The most reliable laboratory test to confirm gadolinium deposition may be a 24-hour urine test, according to the authors. They believe the 24-hour urine gadolinium provides the best window for “mobile” circulating gadolinium in the patient, whereas a blood sample only provides a snapshot view.”

On Dec. 19, 2017, the FDA issued a Drug Safety Communication concerning gadolinium-based contrast agents (GBCAs) for magnetic resonance imaging (MRI).  The agency alerted health care professionals and patients about the dangers of gadolinium retention in the human body.    The FDA announced that a new class warning would be required for all GBCAs concerning gadolinium remaining in the body for months or years  following the drug’s injection.

FDA also announced that GBCA makers must conduct human and animal studies to further assess the safety of gadolinium contrast agents. The agency is also requiring a patient medication guide be given prior to a patient’s receiving any GBCA.  The FDA says gadolinium retention has not been directly linked to adverse health effects in patients with normal kidney function, and the agency “has  concluded that the benefit of all approved GBCAs continues to outweigh any potential risks.”

Gadolinium became popular within the medical community because of its ability to help doctors obtain better results from patients who have had MRI’s performed for a variety of reasons. Administered by injection prior to an MRI, gadolinium serves as a contrasting agent within the patient’s body.  It creates a distinct contrast between blood vessels and surrounding tissues and organs as they’re viewed on an MRI, or sometimes an MRA.  The contrast can help doctors see the patient’s internal structures much more clearly, helping to avoid potential mistakes or omissions.

These brands of contrast dyes all contain some level or form of gadolinium.