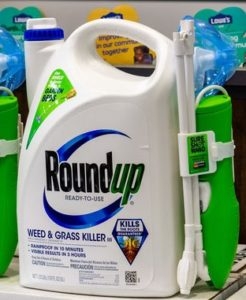 Monsanto is a company with a gift that keeps on giving this holiday season. Its flagship product – the pesticide glyphosate – continues to poison millions of people, animals, and plants. Roundup’s best known ingredient is now found in most of our food, much of our drinking water, and many of our bodies. Glyphosate is so ubiquitous that it drops from the sky in most US rainfall, as well as into much of the food-growing soil throughout the world.

Monsanto not only continues to poison the earth and most of its inhabitants with its dangerous chemicals; it also poisons public discourse when conscientious citizens and researchers attempt to shed light on the company’s nefarious history and dubious (at best) products.

Monsanto (now owned by Bayer) saw author Carey Gillam as such a threat that it paid Google to censor and throttle search engine results for her name and books. Monsanto also paid Google to move blogs and stories defaming Ms. Gillam and her work to the top of search engine results. To help promote that Google propaganda campaign, Monsanto also paid other writers to publish pieces that attacked and denigrated Ms. Gillam and her work, as well as the work of others who have examined Monsanto’s history and its unnecessary and dangerous products.

The truth about Monsanto’s business and products is so damaging that Monsanto had already launched a plan to discredit Carey Gillam’s book Whitewash: The Story of a Weed Killer, Cancer, and the Corruption of Science – even before the book appeared in print:

“Even before Whitewash came out, we know now from the documents that Monsanto was preparing to discredit the book, to discredit me. What we see from the documents that have come out is that the company had a strategic plan, a project action plan, with 20-some different line items and a consulting company in Washington, D.C., and numerous individuals engaged in, you know, covert and secretive strategies to make it look like third parties, for instance, were writing negative book reviews about me. Independent individuals were giving talking points to discredit me and to smear the book. We know from the documents that Monsanto talked about purchasing Google blog postings, search engine optimization, so that if people searched for my name and the book, they would get a host of negative, slanderous information about me. And all of this was done to look like it didn’t come from Monsanto, to look like it was coming from independent third parties — farmers or scientists or others. And we saw that play out. I saw that play out on Amazon, on one weekend, after the book was released, when a whole host of negative book reviews, all at once, with similar talking points, sounding like they came from one person almost, just poured onto Amazon to try to take the book down.”

The good news is that Monsanto’s subterfuge failed to make Whitewash disappear from the public eye. The book has a 5-star average review at Amazon.com (the highest rating possible), with 199 readers having responded so far. Most of the reviews glow with praise for Ms. Gillam’s book and her work.

The Monsanto Papers also showed the company had surveilled other writers or environmental “activists,” including singer Neil Young, whose 2015 album titled “The Monsanto Years” brought the attention and ire of the company.

Ms. Gillam, meanwhile, has continued to investigate Monsanto and its products.

In November 2020, she was reporting on scientific papers regarding the ubiquitous contamination of the earth by Monsanto and glyphosate. Newly published scientific papers have shown we need to understand the pesticide’s impact exposure on our health, especially as it relates to the human gut microbiome.

Most of the world now understands that human health begins in the gut. Alarmingly, researchers estimate that approximately 54 percent of species in the core of the human gut microbiome are potentially sensitive to glyphosate.

Researchers from Finland’s University of Turku said they used a new bioinformatics method to make the finding. They said that since a large proportion of bacteria in the gut microbiome are susceptible to glyphosate, the pesticide “may severely affect the composition of the human gut microbiome.”

The Turku paper was published last month in the Journal of Hazardous Materials.

Related: Is there a Glyphosate and Covid-19 Connection?

Microbes in the human gut include a variety of bacteria and fungi. They are believed to impact immune functions and other important processes. More and more scientists are recognizing how unhealthy gut microbiomes contribute to many different diseases.

Concerns about glyphosate’s impact on the human gut microbiome stem from the fact that glyphosate works by targeting an enzyme known as 5-enolpyruvylshikimate-3-phosphate synthase (EPSPS.) This enzyme is critical to the synthesizing of essential amino acids.

The authors concluded by calling for further empirical studies to determine the actual impact of glyphosate on the human gut microbiota and other organisms. We need further studies to reveal glyphosate residues in food.

The FDA inexplicably does not test food for glyphosate. (Only Mike Adams, who runs the youtube-, facebook- and twitter-banned naturalnews / dot / com web site tests ingestible foods and supplements for glyphosate)

“To determine the actual impact of glyphosate on the human gut microbiota and other organisms, further empirical studies are needed to reveal glyphosate residues in food, to determine the effects of pure glyphosate and commercial formulations on microbiomes and to assess the extent to which our EPSPS amino acid markers predict bacterial susceptibility to glyphosate in in vitro and real-world scenarios.”

The problem with doing any studies that may turn out unfavorably for Monsanto or Bayer or any other corporate conglomerate is that there is little money for doing so. Monsanto and Bayer and other chemical and drug companies not only have the lion’s share of the money, but also the vested interests in their own products. Their nearly inexhaustible resources and corporate profit incentives lead inexorably to their paying for and then performing most of the studies themselves. That obvious conflict of interest has led to lawsuits resulting in billions of dollars being awarded by juries to people whom these companies have been accused of injuring.

We urge all of our readers to follow the money in every case, and to realize that whatever is in any company’s best interests may not be in the best interests of the people targeted for that company’s products. Here as everywhere, the old aphorism serves: Buyer, beware!