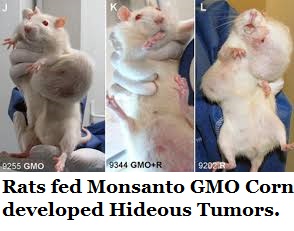 A journal editor was secretly on Monsanto’s payroll when he retracted a damning Roundup cancer study.  A. Wallace Hayes was being surreptitiously paid by Monsanto when he retracted the now famous Gilles Seralini rat cancer study.  That groundbreaking research showed that rats fed corn grown with glyphosate developed hideous tumors and also died quicker than (more fortunate) rats who drank untainted water and ate non-GMO corn.

Monsanto Threatened by Cancer Study
The Seralini study was, and is, so dangerous for Monsanto, because it threatens the company’s entire business model.  Monsanto’s herbicide (pesticide) products earned the company $1.9 billion in gross profits in 2015.  Consequently, Monsanto acted quickly when the Seralini study began to pull back the dark GMO curtain that hides the awful truth.

The Seralini study gives the lie to the notion that GMO foods are safe.  This is why Monsanto went immediately into overdrive to discredit and destroy it.  Monsanto also dispatched its minions in the press (like Stanford academic Henry I. Miller) and blogosphere to destroy the messenger.  It was the same ploy the nasty biotech industry had pulled with Italian researcher Dr. Arpad Pustzai and any others who have found serious health problems linked with GMO foods.

GMO Foods are the New Cigarettes

In the book, Seeds of Deception, Jeffrey M. Smith records these alarming quotes from Dr. Arpad Pusztai, who was roundly attacked and discredited (by biotech minions) after he tested GMO foods and began telling the truth about them.  Dr. Pusztai compares the current GMO food deception with the tobacco industry deception that dragged on for decades. That subterfuge was largely made possible with the help of medical doctors (along with hucksters like Morris Fishbein and propaganda promoter Edward Bernays).  The Journal of the American Medical Association even used AMA doctors to promote cigarettes.

Dr. Pustzai: GM Problems may be Irreversible
“The problems with GM foods may be irreversible and the true effects may only be seen well in the future,” said Dr. Pusztai.  “The situation is like the tobacco industry.  They knew about it but they suppressed that information. They created misleading evidence that showed that the problem wasn’t so serious.  And all the time they knew how bad it was.  Tobacco is bad enough. But genetic modification, if it is going to be problematic, if it is going to cause us real health problems, then tobacco will be nothing in comparison with this.  The size of genetic modification and problems it may cause us are tremendous.”

GMO Freak Show
Dr. Pustzai also blew the whistle on early GMO experiments which continue on us all today:
“In 1985 pigs were engineered with a human gene that produces human growth hormone. The scientists’ goal was to produce a faster-growing pig. What they got was a freak show… In one of the first litters born with the growth hormone genes, a female piglet had no anus or genitals. Some of the pigs were too lethargic to stand. Others had arthritis, ulcers, enlarged hearts, dermatitis, vision problems, or renal disease.”

GMO foods are a hydra-headed monster that undoubtedly contribute substantially to all those maladies in humans today.  Several studies have already linked Roundup with kidney and liver problems. The World Health Organization has announced that glyphosate is a probable carcinogen, triggering thousands of Monsanto Roundup Cancer Lawsuits.

Editor on Monsanto’s Payroll Retracted Roundup Cancer Study
Prior to Gilles Seralini’s study on GMO-fed rats, as well as other studies which are beginning to leak out, Monsanto had been the world’s biggest winner in the suicidal pesticide-based farming methods in vogue since the end of WWII.  The ever-growing problem is that runaway chemical farming dumps greater and greater amounts of cancer-causing pesticides on the earth and into the groundwater. In addition, Monsanto’s pesticide-based farming methods, along with the company’s toxic seeds, deplete soils of necessary nutrients.  Meanwhile, farmers around the world have sadly dumped greater and greater amounts of Roundup and glyphosate into the earth, as pesticide-based farming has given rise to bigger and bigger “superweeds” that have overwhelmed thousands of acres of once-rich farm land.

Editor in Chief a Monsanto Shill
And now recently released court documents reveal what many people have long suspected: Monsanto reverse engineered the retraction of Dr. Seralini’s groundbreaking study on the carcinogenic potential of glyphosate.

The Editor in Chief of the journal Food and Chemical Toxicology was being secretly paid by Monsanto when he oversaw Seralini’s damning study’s retraction.  Monsanto may have gotten away with this subterfuge had their lawyers succeeded in preventing internal company documents from being released.  Monsanto lawyers tried to stop the documents’ release in a lawsuit filed against Monsanto by people who claim they were stricken with non-Hodgkin’s lymphoma or other cancers as a result of using Roundup.

Mainstream News Misinformation
Bill Gates, a heavy Monsanto shareholder, was one of the first to point to the Monsanto-engineered retraction as proof that GMOs are safe and its detractors are misinformed.  Mr. Gates failed to mention (perhaps he didn’t know) that the retraction was engineered by Monsanto. A google search of the subject will show google’s own corporate agenda in line with biotech’s.  Google search engine results coyly downplay Monsanto collusion and promote the phony story that the Seralini study retraction was somehow legitimate.

Editor paid $400 per hour by Monsanto
The documents disclosed in a Roundup cancer lawsuit show that the journal’s editor, A. Wallace Hayes, had been involved in a consulting agreement with Monsanto prior to his involvement in the Seralini study’s retraction.  Mr. Hayes was paid $400 an hour by Monsanto for his “services.” The documents show that he was contracted to help establish a network of “experts,” participate in meetings, and deliver a seminar about regional issues in Latin America related to glyphosate toxicology.

Mr. Hayes hid his Monsanto ties. He failed to recuse himself from involvement in the Seralini study. Instead, he oversaw a “review” of the study that was carried out by unnamed parties who also failed to disclose whether or not they, too, were paid by Monsanto, or had some vested interest in helping the company. Mr. Hayes then used the findings of these unnamed parties to retract the Seralini study.

Monsanto.News.com
Monsanto.News.com reported that in a letter to Seralini, Hayes, the journal’s Editor in Chief at the time, wrote that although the study’s results were not fraudulent, he felt they were “inconclusive, and therefore do not reach the threshold of publication.”  His conclusion came despite the fact that the study had passed a thorough peer review process prior to being published in the first place.

Monsanto Fears Long-term Glyphosate Studies
Further emails show Monsanto felt the Seralini study’s publication would leave Monsanto vulnerable to the possibility of other scientists and regulators calling for long-term studies on the effects of GM crops and the pesticides used to proliferate them.

Mr. Hayes’ relationship with the journal was not tarnished, however.  The publication now names him an “emeritus editor”.  Monsanto money for hungry writers, like its glyphosate gift to the world, is something that just keeps on giving, apparently.

Monsanto MO: lie, bribe, bully, deny, deceive
The truth revealed in the Monsanto Roundup lawsuit documents show a systematic effort by the corporation to deceive people into believing Roundup is not carcinogenic. Monsanto has and will use any means possible to defend its flagship product.  Monsanto will pay off scientific journal authors (like the unconscionable shill Henry I. Miller), editors (like A. Wallace Hayes), and so-called expert panel members. Monsanto will counter negative comments on social media with fake science.  Monsanto will smear the reputation of real journalists (like Mike Adams and many others), and it will smear real researchers (like Dr. Armed Putszai and Dr. Gilles Seralini).  There is almost nothing Monsanto won’t do to anyone who threatens the company’s bottom line, which depends on the continued poisoning of the land, people, and civil discourse.

Monsanto’s maneuvering is helping show more and more people that Roundup is indeed toxic and terrible for the earth and for us all.  If Roundup were as safe as Monsanto claims, the company wouldn’t need to lie, bribe, bully, deny and deceive the public.  And farmers and homeowners stricken with non-Hodgkin’s lymphoma and other cancers would not need to take the pesticide king to court.