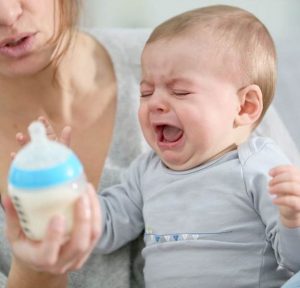 A recent House report found many baby food products made by the country’s biggest baby food makers contain significant levels of toxic heavy metals. Arsenic, lead, cadmium and mercury have been found in the infant baby foods. Any and all of those toxic metals can endanger infant neurological development. Lead alone is linked to learning disabilities, neurological disorders, mental retardation, lower IQ, and other health problems.

Campbell Soup (Plum Organics baby foods), Walmart (Parent’s Choice) and Sprout Foods declined to cooperate with the subcommittee, according to its members; though Campbell and Walmart spokesmen disputed that declaration (see below).

“Over the last decade, advocates and scientists have brought this to the attention of the Food and Drug Administration,” subcommittee Chair Raja Krishnamoorthi (D-Ill.) told a Washington Post reporter. “The FDA must set standards and regulate this industry much more closely. Starting now. It’s shocking that parents are basically being completely left in the lurch by their government.”

The FDA said it was reviewing the findings, but we already know the agency has long failed to demand stringent testing by baby food makers.

Arsenic is ranked as No. 1 one among naturally occurring substances that pose a significant risk to human health, says the Department of Health and Human Services’ Agency for Toxic Substances and Disease Registry. The FDA has thus far failed to establish any maximum arsenic levels for baby food (except for infant rice cereal, where the maximum is a questionable 100 parts per billion inorganic arsenic). The agency has, at least, set the maximum allowable levels in bottled water at 10 ppb of inorganic arsenic.

The ATSDR lists lead as No. 2 on its list of potential health threats. Inexplicably, no federal standard exists for lead in baby food. However, a growing health expert consensus says baby food lead levels should not exceed 1 ppb. The American Academy for Pediatrics, the Environmental Defense Fund, and Consumer Reports have all generally called for a 1 ppb level in food and drinks for babies and children.

“Beech-Nut established heavy metal testing standards 35 years ago, and we continuously review and strengthen them wherever possible.”

(Is it not fair to ask why a company that makes baby food doesn’t do its own extensive heavy metal testing without being prompted by the US House of Representatives after a special report, or the FDA? Life itself is not a “regulation” game where healthy babies are concerned.)

The subcommittee also found that Gerber used carrots which contained as much as 87 ppb of cadmium. Nurture sold baby foods with as much as 10 ppb of mercury. When baby foods tested over these companies’ own limits for heavy metals, the food makers sold them anyway. (One wonders if the makers feed their own babies this “food.”)

Gerber told WaPo it hasn’t seen the report and could not comment on the findings.

Environmental Defense Fund weighs in on the metals

“Exposure to these toxic heavy metals affects babies’ brain development and nervous system. It affects their behavior, permanently decreases their IQ, and, if you want to boil it down to dollars, their lifetime earnings potential,” says Tom Neltner, chemicals policy director for the Environmental Defense Fund. The EDF has investigated and blown the trumpet about the problem of lead in food for 25 years.

The House committee launched its investigation after learning of high arsenic levels in some baby foods in a study by Healthy Babies Bright Futures, a non-profit alliance of groups working to reduce toxic chemical exposures.

“What they did was take food off store shelves and test it. We said we should go straight to the companies and ask for their materials,” Krishnamoorthi said. “For the companies that didn’t participate, it raises the concern that they might possess information that indicates the toxic metals in their foods might be even higher than their competitors.”

Among all the Hain baby foods tested, inorganic arsenic levels were between 28 percent and 93 percent higher in the finished products than in the ingredients alone.

“We are disappointed that the Subcommittee report examined outdated data and does not reflect our current practices. The report also inaccurately characterized a meeting with the FDA,” Shallow said. She added that Hain took several steps after the meeting to reduce the levels of heavy metals in finished products.

He said the larger issue is that FDA must establish legal standards for each of these heavy metals in baby foods.

“We acknowledge that there is more work to be done,” said the FDA in a statement.

“(The) FDA takes exposure to toxic elements in the food supply extremely seriously, especially when it comes to protecting the health and safety of the youngest and most vulnerable in the population. Toxic elements, like arsenic, are present in the environment and enter the food supply through soil, water or air. Because they cannot be completely removed, our goal is to reduce exposure to toxic elements in foods to the greatest extent feasible and we have been actively working on this issue using a risk-based approach to prioritize and target the agency’s efforts.”

Gerber (owned by Nestle) is the largest baby food company and one of the main brands available to low-income families who rely on Special Supplemental Nutrition Program for Women, Infants, and Children (WIC) benefits. The data Gerber gave the committee reveals Gerber used rice flour very high in arsenic, carrots high in cadmium, and several ingredients high in lead.

“As stated in our 2019 response to the congressional inquiry, the elements in question occur naturally in the soil and water in which crops are grown,” said Dana Stambaugh, a Gerber spokeswoman. “To minimize their presence, we take multiple steps.”

According to the report, one of Gerber’s major competitors, Beech-Nut, routinely used high-arsenic additives and ingredients containing up to 344 ppb cadmium.

“We work closely with our suppliers to identify the best farms and regions to procure the highest quality ingredients,” Beech-Nut’s Jacobs said. “We test every delivery of fruits, vegetables, rice and other ingredients for up to 255 contaminants to confirm that every shipment meets our strict quality standards.”

Do Added Ingredients include Heavy Metals?

Chief executive Anne Laraway said that many of the results provided as part of the 2019 report were collected based on a small portion of their portfolio. [They] are not representative generally of our entire range of products at-shelf today.”

The European Union has set the maximum lead level in infant formula to 20 ppb. The test results of many of these baby foods and their ingredients far exceed that level.

According to Krishnamoorthi, baby food makers’ internal standards permit dangerously high levels of toxic heavy metals. This report reveals that the companies have often sold foods that exceeded their own established levels.

A spokesman for Campbell, Thomas Hushen, denied the committee’s statement that Campbell’s failed to comply with a request for information. He produced a letter to Krishnamoorthi dated Nov. 6, 2019, which said internal testing showed each product was well within levels deemed acceptable by independent authorities.

“We fully cooperated with the House Oversight Subcommittee’s baby food review,” said Mr. Hushen in an email. “(We) welcomed the opportunity to work with the Subcommittee in 2019 — and continue to do so today.”

Randy Hargrove, senior director of national media relations for Walmart, said the company also responded to the subcommittee’s request last year in a letter, saying that any product testing would be managed by Walmart’s suppliers.

Sprout Foods did not respond to WaPo requests for comment.

“The FDA must step into the breach,” said Krishnamoorthi, who added that this is the committee’s third baby-focused investigation. The other two investigated car seat safety and talcum powder safety.