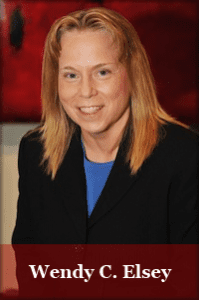 Attorney Wendy Elsey has been a member of the Matthews & Associates team for more than 10 years. She has worked extensively in mass torts, including cases involving dangerous drugs, medical devices, and toxic torts. She has served as the primary attorney for cases involving injuries and deaths attributed to GranuFlo / NaturaLyte, Testosterone Replacement Therapy, Xarelto, and most recently, Monsanto Roundup.

Since joining Matthews & Associates in 2009, Ms. Elsey has focused on drug, medical device, and automobile liability cases that include:

Wendy Elsey has been selected for inclusion among the Top 100 Trial Lawyers for 2020. The invitation-only organization consists of premier trial lawyers from each state or region who meet stringent qualifications as civil plaintiff and/or criminal defense trial lawyers. Selection is based on an objective, uniformly applied process that includes peer nominations and third-party research. Membership includes only the most qualified lawyers from each state or region who demonstrate superior qualifications of leadership, reputation, influence, stature and public profile. The standards comply with state bar and national Rule 4-7.

After spending more than a decade working as a paralegal for several Texas law firms – including Allison, Bass & Associates, Scott Hooper & Associates, O’Quinn & Laminack, LLP – Wendy gained valuable experience in state and federal civil, class action, medical malpractice, and personal injury litigation. She was finally able to realize her dream to attend law school, working as a paralegal during the day and attending classes during the evenings. She graduated from South Texas College of Law in 2005, becoming a member of the State Bar of Texas and the U.S. District Court of Texas, Southern District in 2006.

Ms. Elsey cannot remember a time when she didn’t want to be an attorney.  Even as a child, she had the notion that she would have a career pursuing justice for individuals in need.  “It was difficult working full-time to support my family during the day and studying at night.  However, as a plaintiffs’ attorney, I find great satisfaction in pursuing justice against the corporations and individuals who choose greed over human rights. To do anything less is not acceptable.”

In addition to her work at Matthews & Associates supporting plaintiffs’ rights, Ms. Elsey serves as an advocate for individuals with autism through her support of Autism Speaks and other organizations that benefit individuals who, like her young son, have autism. In her free time, Wendy plays tennis and spends time with her son and two rescue dogs, Shelby and Piper.