Attorney Pedro “Peter” de la Cerda is of counsel to Matthews & Associates.  He grew up in Dallas, Texas in a tight-knit community that valued faith, hard work, and helping the less fortunate.  After high school, he attended The University of Texas at Austin, where he graduated in three years with a Bachelor of Arts in Psychology.  Deciding to pursue a career in the courtroom, Mr. de la Cerda then attended Texas Tech University School of Law, as well as the Rawls College of Business.  There, he earned both Juris Doctorate and Master of Business Administration degrees.  He was a member of the Texas Tech Law Review and Beta Gamma Sigma, and was graduated cum laude.

Mr. de la Cerda is licensed to practice in Texas and California and has achieved many distinctions from his colleagues.  From 2014 until 2017, he was designated a “Rising Star” by SuperLawyers®, which is a rating service of outstanding lawyers from more than 70 practice areas who have attained a high-degree of peer recognition and professional achievement.  From 2015 until 2017, he was designated “Top 40 Under 40” by the National Trial Lawyers Association, a professional organization composed of the premier trial lawyers from across the country who exemplify superior qualifications as civil plaintiff trial lawyers.  This year, he received the distinction of “SuperLawyer” from SuperLawyers®, a distinction reserved for only about 5% of lawyers.

As a young attorney looking for courtroom experience, Mr. de la Cerda began his career defending physicians, nurses, hospitals, trucking and manufacturing companies in disputes involving personal injury, medical malpractice, products liability, and toxic tort.  After seeing many people who were truly injured and deserving of fair compensation, however, Mr. de la Cerda was moved to cross the courtroom aisle and prosecute cases on behalf of plaintiffs in personal injury cases.  Today, he proudly pursues pharmaceutical and medical device manufacturers whose defective products injure the public.  He is also seeking justice for the victims of the 2018 Camp Fire in California, whether it be for personal injury, property damage, or business interruption.

Outside of his busy legal practice, Mr. de la Cerda enjoys spending time with his wife and trying to keep up with their two precocious sons. 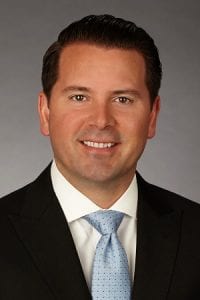