Attorney David Matthews has been chosen – through US News & World Report – as one of the Best Lawyers in America from 2016-2020, and repeatedly voted by his peers as one of the top trial lawyers in the country.  His firm is handling clergy abuse lawsuits and Boy Scouts of America abuse cases across the country, as well as Covid business interruption insurance claims.

Matthews & Associates Law Firm – selected among the best plaintiff’s firms in the country by US News & World Report – has secured more than $2.5 billion for a wide variety of clients. With offices in Houston, Texas; Chico, California; and New York, New York, the firm has long been recognized as a national leader in civil litigation.

Mr. Matthews is licensed to practice law in Texas, New York, Pennsylvania, and Mississippi; but he has, for decades, handled cases nationwide through pro hac vice arrangements with attorneys licensed in virtually every state.

David Matthews has, for decades, represented victims of dangerous medical devices such as IVC filters, and those injured by drugs such as Invokana. He also represents plaintiffs in Roundup cancer cases, as well as injured children and their parents injured by pesticides in chlorpyrifos pesticide birth defects litigation.He also represents California wildfire survivors.

A Long Record of Success & Recognition

* Previous results don’t guarantee future case results: each must be litigated according to its own facts.

“When the judge read the verdict in Martha Salazar’s case, and we learned the jury ordered [the medical device maker] to pay Martha more than $76 million dollars, we knew they believed every word she said.  We realized they knew the defendant was truly reckless in selling an untested and defective medical device, and they believed in us and believed in our case.  Martha and I both cried. She won’t entirely have her health back, but some healing had begun.”  – David Matthews

Mr. Matthews has received the premier rating in 2019 from Martindale-Hubbell® Peer Review Ratings™.  Martindale.com proclaims on its web site: “The Martindale-Hubbell® Peer Review Ratings™ are an objective indicator of a lawyer’s high ethical standards and professional ability, generated from evaluations of lawyers by other members of the bar and the judiciary in the United States and Canada. . . .” 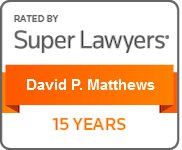 Mr. Matthews has also been recognized as a Texas Super Lawyer – a Thomson Reuters designation – from 2003-2004 and 2006-2020.  SuperLawyers.com web site reports, “Super Lawyers is a rating service of outstanding lawyers from more than 70 practice areas who have attained a high-degree of peer recognition and professional achievement. The selection process includes independent research, peer nominations and peer evaluations.”

Mr. Matthews has helped injured people across the country attain some of the largest verdicts or settlements in pharmaceutical litigation against the makers of such drugs as Phen-Fen, Rezulin, Vioxx and Bextra-Celebrex.  He worked 18 years as a partner in the oldest personal injury firm in Texas, the last 12 as head of Matthews & Associates, with offices in Houston and New York City.

Attorney David Matthews been featured in Mother Jones Magazine, on CNN and Dateline MSNBC, and interviewed on National Public Radio (NPR) and several other nationwide outlets. His legal expertise has been quoted in The Wall Street Journal,  New York Times, Los Angeles Times, Boston Globe, Houston Chronicle, the UK’s Daily Mail and many other publications. Married for 25 years, he is a father of five who contributes to several local, national, and international charities, including Human Rights First, where he also serves on the board. He loves music and counts Texas legend Willie Nelson a friend. 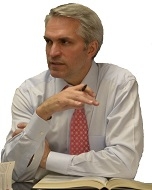