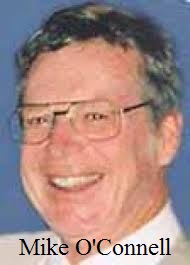 At least one Wisconsin farmer died fighting Monsanto.  Mike O’Connell tried blowing the whistle on the biotech bully from Missouri before he died of non-Hodgkin’s lymphoma in 2011. He wrote books of poems as well as letters to his political representatives and to local newspapers blowing the whistle and attempting to stop FDA approval of Monsanto’s insidious bovine growth hormone (rBGH), called Posilac.  He also refused to use Monsanto’s chemically-perverted GMO seeds and its Roundup poison on his own corn crops.

Mr. O’Connell may not, however, have mistrusted Monsanto enough. He did use Roundup to kill weeds on his farm property.  It was a choice which may have killed him.  His widow said he was drenched in Roundup on at least one occasion after a spill while mixing it in his barn.  He most certainly inhaled the poison for decades when his farm neighbors routinely sprayed it on their own corn and soy crops. A former college basketball player and restless athlete, he loved to walk for miles at night along the country roads lining his and his neighbors’ properties.

We are All Glyphosate Poisoned Now

Most of the farmers whose property surrounded the O’Connell farm regularly used Roundup on their crops.  The southern part of the state where he farmed for three decades is annually drenched in millions of gallons of Monsanto’s best-selling poison.  Fence lines can’t stop pesticide drift.  Tests show Roundup’s only listed active ingredient – glyphosate – is present in more than 90 percent of Americans. We are all being forcefed glyhosate in one form or another.  Even organic wine has been found to contain glyphosate, though in lower levels than conventionally-produced wine.  Glyphosate has been proven to contaminate our water, popular foods, wine, beer, and our vaccines. Yes, this known carcinogenic is being injected directly into the bloodstreams of babies and small children.

Time will tell just how many of us will die of lymphoma like Mr. O’Connell did, or of some other malady related to Roundup exposure. 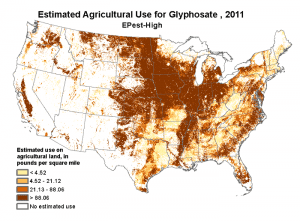 Mike O’Connell’s story demonstrates that it probably doesn’t matter whether we liberally spray Roundup ourselves.  Tests have proven that glyophosate accumulates over time in the human body.  The more exposure one has, the more it accumulates. We’re not unlike fish who all swim in the same water.  We all breathe the same air, and like John Kennedy said in trying to stop the arms race, “We are all mortal.”

Mike O’Connell was no ordinary farmer – if any fool could ever say there is any such thing as an “ordinary farmer.”  He graduated from Dartmouth College with a B.A. in English, and then earned a Masters Degree in English from the University of Wisconsin.  He was teaching Journalism at a  high school in 1968 when he fell in love with the land in southern Wisconsin.  At age 25, he bought a small farm for $19,000, with a down payment of $3,000. In the next thirty years he would get an education in farming and its nearly complete takeover by corporate interests like Monsanto and its government and university enablers.

He saw how Monsanto gained FDA approval for bovine growth hormone despite the objections of thousands of farmers as well as scientists who showed that it was fraught with peril for both cows and human beings. One team of investigative reporters in Florida were muzzled and then fired — which later led to a whistleblower lawsuit which they won – after they unveiled the ugly truth about Monsanto’s BGH.  ln 1995, Mike O’Connell wrote a poem about the unholy alliance of Monsanto, the FDA and land grant universities like his alma mater, the University of Wisconsin.

One of his poetry collections – My Bucket’s Got a Hole In It – includes several poems calling out Monsanto for its dangerous products and surreptitious dealings with government regulators and educational institutions beholden to the biotech giant by virtue of its multi-million-dollar “contributions.”

“The deep pockets of the chemical companies allowed them to buy influence for approval of Bovine Growth Hormone injections in State Legislatures and at the Food & Drug Administration. More discouraging was the way they were able to silence any dissent from within Land Grant Universities, institutions founded to preserve, protect, and defend family farms.

BGH had no redeeming social or economic value for farmers, cows, or consumers. But the prospect of a $26 million Biotech Center on the University of Wisconsin-Madison campus was enough to guarantee undivided support from career-conscious faculty and extension agents.”

After a decade of buying influence in high places, Monsanto finally gained FDA approval of its synthetic bovine growth hormone product, Posilac, just before the holidays in 1993.  By this time, some of the Monsanto researchers had taken posts inside the FDA, where they could pretend to be objective reviewers of their own company’s data.

Mike O’Connell would no doubt be pleased to see that some people harmed by Monsanto have won dramatic jury verdicts — of $289 million and $80 million (though they’re on appeal, of course). Though justice against the biotech bully from St. Louis is coming late, at least Monsanto is being taken to task for its monstrous crimes against us all, against nature.  Mass chemical poisoning of our land, air, and water is not the answer to our food challenges.  One out of every two people will now develop cancer. This madness must end. We can’t both poison our food and eat it, too.  It was nothing but insanity to think that we ever could, the kind of insanity that Monsanto money drives. Nobody knew that lesson better than Mike O’Connell.